Marketing a biotech product before it officially launches can be challenging but is critical to drive rapid product adoption. For instance, how do you effectively launch a new sequencing platform in a very competitive space? Many biotech companies in this stage utilize both paid advertising and inbound marketing to increase brand and product awareness prior to the official product launch. We spoke with Kaley Mientkiewicz, Ph.D., Senior Account Manager at Samba Scientific, about the inbound marketing strategies that Singular Genomics used to launch their new G4 Benchtop Sequencing Platform with resounding success at AGBT this year.

Founded in 2016 with the intention to innovate in the field, Singular Genomics developed the G4 Benchtop Sequencing Platform. It offers unparalleled speed, power, accuracy, and flexibility. The G4 was successfully launched in December 2021 using key inbound marketing practices deployed in two phases.

The first phase centered on generating awareness of Singular Genomics as a company and of their instrument using organic LinkedIn posts and email campaigns. This pre-launch period was a “crucial time to raise awareness and start to bring in initial interests and contacts, who could turn into some of the first sales,” Mientkiewicz explains. As part of this phase, they completed a branding exercise, which required establishing a brand guide and strong messaging to set the tone for their market presence. Companies must establish “strong, consistent, and concise messaging that resonates with target customers,” Mientkiewicz emphasizes. Defining the nuances and relationships of their value propositions — power, speed, accuracy, and flexibility – enabled Singular Genomics to differentiate themselves from both established and emerging competitors.

The initial email campaigns were successful in growing their contact base to nurture and accelerate sales at time of launch. Their initial email containing information about their instrument with the subject line “Discover the G4 Sequencing Platform” was sent to over 9,000 contacts and had a 17.1% open rate (OR) and 12.9% click-through rate (CTR) — nearly double that of the industry standard for cold email opens. Subsequent emails also performed well, with subject lines “Take a closer look at G4 performance” (52.6% OR, 52.7% CTR) and “G4 specifications: designed to deliver” (48.8% OR, 37.3% CTR). Thanks to this strong email engagement, Singular Genomics was able to effectively build a following for future market outreach.

Current sequencing platforms use high-capacity flow cells, designed to run many samples in parallel. To make sequencing cost-efficient, users must fill up a whole flow cell before running the sequencer. It can take up to a month to gather enough samples, resulting in long turnaround times for small sample runs. Singular Genomics revolutionized the field with the G4 Benchtop Sequencing Platform that offers increased operational flexibility, industry-leading run times, and more data than other benchtop sequencers. For instance, their flow cell design offers the flexibility to run samples in a scalable manner, which in turn accelerates the turnaround time of data. The G4 instrument can also be applied to a variety of RNA sequencing experiments, including single cell RNA sequencing, as well as target enrichment and exome sequencing. These key value propositions — flexibility, speed, and data output (power) — were emphasized in all marketing materials, giving them a strongly differentiated story.

Singular Genomics debuted their instrument at the conference Advances in Genome Biology and Technology (AGBT) earlier this year with continued success thanks to a strong attraction strategy. Mientkiewicz says that “phase two was about supporting their in-person presence at conferences after their online launch — a ‘come meet us and get a demo’ attraction strategy.” Prior to AGBT, there was a large push to develop assets like data sheets, posters, app notes, and tech notes. Singular created several assets that demonstrated the G4’s performance across a wide range of applications, including RNA sequencing and exome sequencing. Gating and monitoring the different assets on the landing page offered insight into what areas were of high interest to their customer segments.

To garner as many targeted contacts from the AGBT conference as possible, Singular Genomics created a landing page that included these assets, as well as a form for setting up personal meetings and on-site instrument demos. In the future, they can use the information from these forms to segment contacts into different interest groups and follow up accordingly. As a note, some conferences offer access to lists of all attendees, but this may be expensive. Alternatively, services like SciLeads offer list rentals of previous attendees. These all serve to expand your reach at the attraction stage of your marketing funnel.

AGBT was a resounding success for Singular Genomics, with nearly non-stop instrument demos and very favorable feedback from those that attended. Singular Genomics has effectively established the G4 Benchtop Sequencing Platform as a real contender in the DNA sequencing market. Since launching their first conference page in early Q2 2022, they’ve seen hundreds of form-fills across various assets, and technical and application-specific assets will continue to be used in nurturing campaigns for all these new contacts.

So, what was the key to Singular Genomics’ rapid success? “Having the content at launch was vital. You know, if you see a new phone that says we’re better than this other phone, you going to think ‘I don’t believe you, show me the data.’ Due to their strategic collaborations established far before launch, Singular had that data immediately available when they revealed their product. Taking advantage of their few initial assets was also important: putting them in different channels and presenting them differently in emails, while we generated more assets,” explains Mientkiewicz. “Having that initial content made them legitimate in the field right off the bat.”

Are you inspired by Singular Genomics’ story? Samba Scientific can support your product or service launch like we did with the launch of the G4. Talk with us today about how we can support your go-to-market plan or upcoming product launch.

Sydney Wyatt is an Associate Account Manager at Samba Scientific. With her Ph.D. in Integrative Genetics and Genomics from the University of California, Davis, and training in science communication, she ensures that her clients’ content is engaging and scientifically accurate. As a former target audience member, she brings a unique perspective to marketing strategies. Learn more about her on LinkedIn. 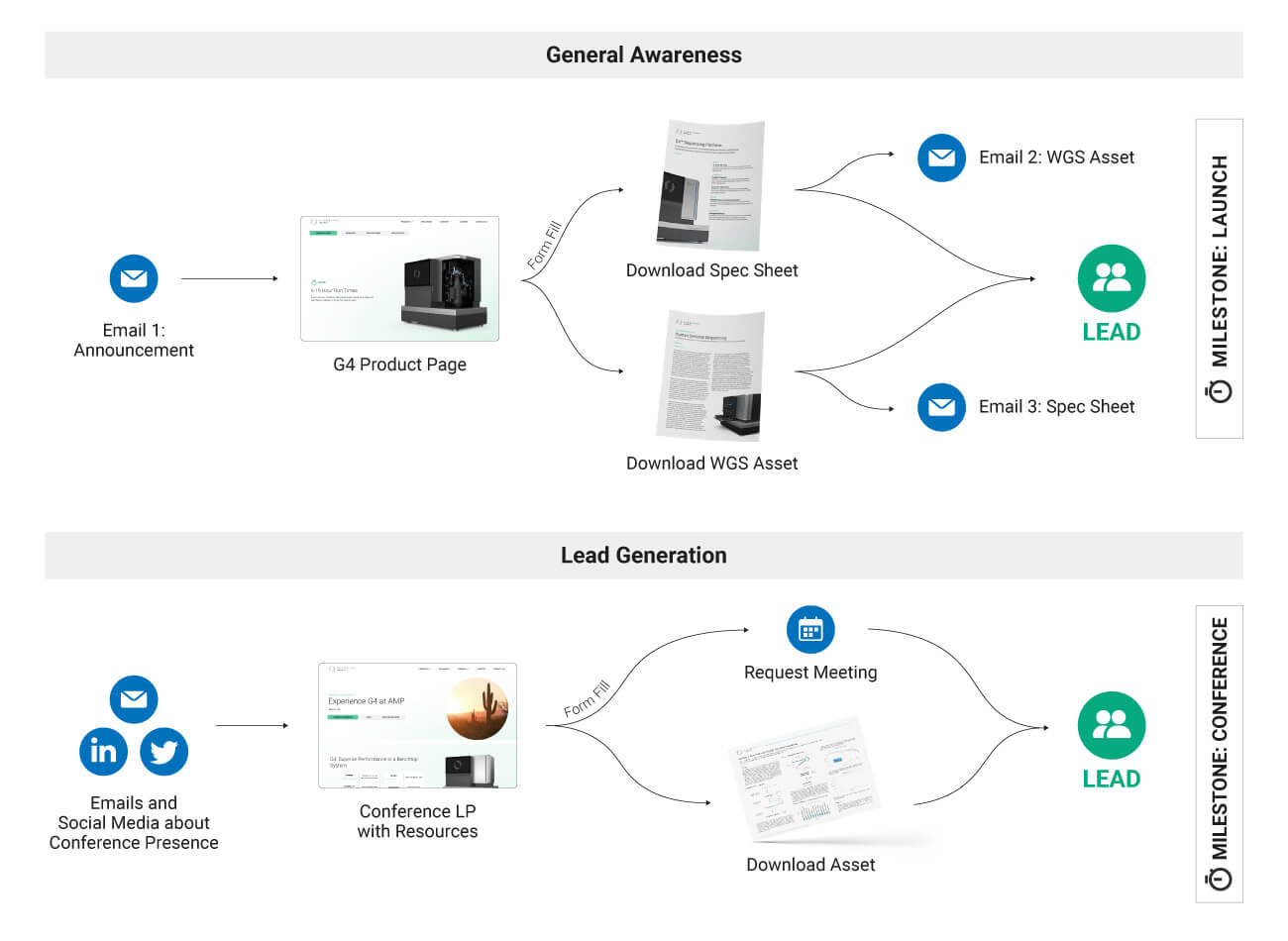 Report To: Director of Client Management